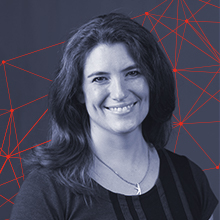 Are we alone in the universe? Dawn Gelino is an astrophysicist for NASA, exploring the diversity and habitability of exoplanets through a multi-disciplinary approach.

Scientific evidence shows that in approximately in a few billion years, planet Earth will no longer be habitable. But will the end of life on Earth be the end of life in the universe? Or will alien planets carry on the torch of consciousness?

These are some of the questions that Dawn Gelino and her colleagues are tackling.

Gelino is an astronomer at NASA who specializes in the search and study of exoplanets—planets that orbit a star other than the Sun.

Since their discovery in the late 1980s, scientists have managed to find more than 3700 exoplanets in almost 2800 solar systems. Some of them are thought to have an atmosphere; a sign that there might be life on that planet.

Gelino’s research includes modelling reflected light from exoplanets, creating and updating an on-line catalogue of potentially habitable planets, and investigating exomoons (moons around exoplanets). She also co-leads the Nexus for Exoplanet System Science (NExSS) initiative, a NASA research coordination network dedicated to the study of exoplanets as potential habitable and inhabited worlds outside of our solar system.

Gelino studied physics at Rensselaer Polytechnic Institute in New York and then received her PhD in astronomy and astrophysics at New Mexico State University. In 2001, she became a Postdoctoral Fellow at the University of California in San Diego and in 2004, she was recruited to work on exoplanet research by the NASA Exoplanet Science Institute.