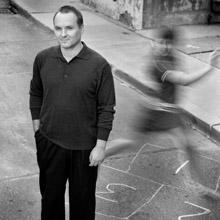 John Mighton is a mathematician and playwright and is the founder of JUMP Math, a charity that is working to improve the teaching math.  He appeared in Good Will Hunting, and contributed a monologue to the film based on the argument he makes in his book The End of Ignorance that most people never get a chance  to succeed in math because they are not taught according to their true potential.  Mighton received an Ashoka Fellowship for his work as a social entrepreneur. His plays have received a number of national awards and have been performed around the world.