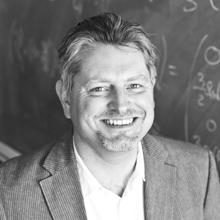 Julien Lesgourgues, cosmologist, explores questions like where did the universe come from, what triggered its evolution, does it contain hints of physical laws or species that we are not yet aware of? A member of the Planck satellite team which published the map of the cosmic microwave background in 2013, he specialises in modelling the evolution of cosmological perturbations, starting from a stage in the early universe called inflation. He authored CLASS, a code used by cosmologists to simulate the universe and watch it evolve on a computer. He is passionate about the arts and also sings operas.