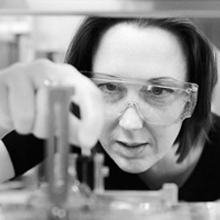 Sheila Rowan started gravity wave research almost thirty years ago during her undergraduate studies at the University of Glasgow. Today, she is now the director of the Institute for Gravitational Research at Glasgow and a contributor to the LIGO observatory, the world’s largest gravitational wave observatory. In January of 2016, the LIGO collaboration announced their first detection of gravity waves. For Rowan, this is not the end, but rather the beginning, of her research field. “Now we can start gravity wave astronomy,” Rowan said. “There are events in the universe that we can only could see with gravity wave signals, and we expect to see many more of these signals in the future.” Rowan thinks that gravity waves could be the key to better understanding dark matter and dark energy—two peculiar phenomena which appear to only interact with visible matter through gravity. She’s also hopeful that it will unveil numerous previous hidden cosmic events in our universe.