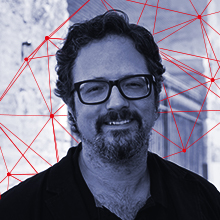 With a B.Sc. in Physical Chemistry from Concordia University in Montréal, Canada, Rafael transposed to electronic arts in the 90s. Until today, he has received important awards, like two BAFTA British Academy Awards for Interactive Art in London, a Golden Nica at the Prix Ars Electronica in Austria, "Artist of the year" Rave Award from Wired Magazine, Governor General's Award in Canada, and the Trophée des Lumières in Lyon, to mention only a few.